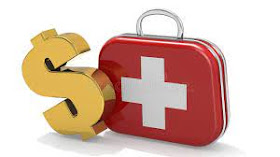 Hello everyone! For those of you just joining in, my name is Jonna Crocker. I am a high school senior who is making a series of blogs for my philosophy class, discussing the injustices for rare disease patients and what we can do to help. This is my fourth blog in this series, so make sure to read my other 3 blog posts as well to learn more!

In my second blog, one of the things that I discussed was the lack of research due to the lack of compensation and revenue that comes along with it. For this blog, I will be talking about the economic impact that rare diseases have on the country and the world on a larger macroeconomic scale.

Back in 2019, A study was conducted called “The National Economic Burden of Rare Disease”. This study analyzed 379 rare diseases as a subset of the 7,000 known rare diseases and attempted to estimate the economic cost of these rare diseases to the United States as a whole. The number they came up with? Nearly $1 trillion dollars. That's right. Between direct medical costs (only 43% of the total) and indirect costs such as absenteeism, lost work productivity, and nonmedical costs, rare diseases have an estimated economic cost of $966 billion.

Due to insufficient sample sizes (remember, these are rare diseases we were talking about), 15.5 million of the 30 million Americans with rare diseases were represented in the survey. It goes on to list the top causes for each category of costs: the highest direct costs were for inpatient care at $143 billion, and the highest indirect costs were absenteeism and lost productivity.

So why is this important and what does this mean for you, an American citizen? At the beginning of this post, I discussed the lack of research being done for rare diseases. Now, when you think about the economic burden that rare diseases cause to the United States, it is evident why countless foundations and legislators are urging policy change to increase investment in rare disease research. We will be discussing policy change further in one of the upcoming blogs, but for now, it is important to see the reasons behind why. If more funding was given to researchers to develop treatment plans and cures for rare disease patients, there would be a significantly smaller number of patients who are hospitalized for their rare diseases. If they are managing their condition, they will likely have more energy to go to work and thrive in that environment. The two leading causes of our economic costs will diminish almost entirely if there are new effective treatment plans on the market. I know that for the time being, it is not likely to cure every single rare disease. But if we start with a few, find treatments, and keep building, it will lead to a healthier America.

In my second blog, I very briefly touched on the Orphan Drug Act and how it was created to facilitate the development of drugs for rare diseases affecting a small portion of individuals. If we expand upon this and really attempt to create treatments through it, the funds allocated will actually end up coming right back to us as we are creating more stability in the economy. But developing new medications is not the only option to get rid of these economic costs. If we advance our diagnostic tools and attempt to test patients for chronic and rare illnesses sooner, it can shorten the time span of 5-8 years to get a diagnosis which would in turn reduce many of the fees for doctors, hospitalizations, and failed medication treatments.

Rare diseases are costly to our economy. Although it is challenging, it would be extremely wise to put measures in place to reduce both the direct and indirect costs that rare diseases have on the environment.